By GpostingDecember 1, 2022No Comments3 Mins Read 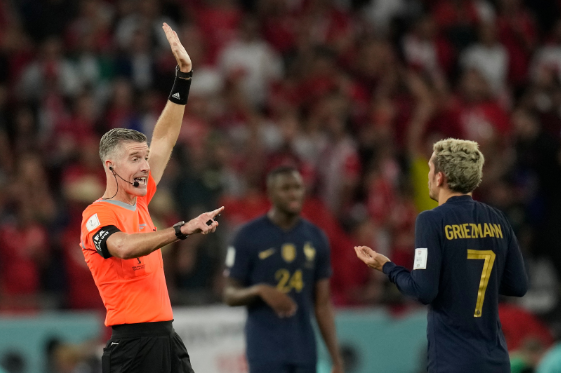 French Football Federation files complaint with FIFA after an equalizer by Griezmann was disallowed against Tunisia in the FIFA World Cup Qatar 2022.

France lost to Tunisia on November 30, 2022, 1-0. The event was held at Education City Stadium. France retains its top position in the Group D table.

The team has already qualified for the knockout round of the FIFA World Cup Qatar 2022. It has now decided to file a complaint to FIFA after a goal scored by forward Griezmann in the extra time was disallowed by referee Michael Conger.

Even though the goal was first allowed for the final count, the VAR asked Conger to give it a look one more time for an offside. It was then learned that the rule was broken, and the goal was, therefore, withdrawn from the board.

This has raised concern within the French Football Federation, also known as FFF, as one of the rules states that the goal cannot be withdrawn after it has been granted and the game has been restarted.

Specifically talking, Law 1.10 states that VAR cannot intervene if the game has been restarted by the referee. With that in mind, Conger should not have been asked to check the goal for a possible rule-out following his whistle to restart the match.

FFF published a statement in this matter, saying that the goal of Griezmann was wrongly disallowed.

A complaint can be filed within 24 hours after the final whistle is blown by the referee. FFF has done so and is awaiting a response at the moment. Assuming the matter goes in its favor, the goal will be reinstated to draw the event and add one point for France while taking away 2 points from Tunisia.

The overall position will not change. France will retain the top spot with 2 wins and 1 draw. Tunisia will be comfortable in the third spot with 2 draws and 1 loss.

Wahbi scored in the 58th minute after Laidouni played the ball. He stepped between two defenders before netting the ball into the far corner. That goal should have been enough to send them to the knockout round of the FIFA World Cup 2022; however, Australia emerged victorious over Denmark with 1-0 in its favor.

France missed maintaining a clean sheet by losing its previous fixture. That will not impact what comes next as Deschamps’ side is set to face Poland on December 04, 2022, at 8:30 pm IST for Round 16 at Al Thumama Stadium.

Meanwhile, Australia will lock horns with Messi-led Argentina on the same date at 12:30 am IST at Ahmad bin Ali Stadium. Chances are thin for Australia with a tiny window of delivering an upset just like Saudi Arabia did.

The journey for Denmark and Tunisia ended in the FIFA World Cup Qatar 2022, with them being in 4th and 3rd position, respectively, for Group D.

FIFA is soon expected to respond to the concern raised by the French Football Federation.